Once again I enjoyed the PHAMExpo…

I had the pleasure of spending time with two of my main makeup home-girls and observing some of the sights and sounds of what’s currently happening in the beauty biz. The show is now over and so it is time for the 2014 PHAMExpo Wrap Up.

Saturday I unfortunately was not able to hear any speakers, including missing Marietta Carter-Narcisse speak *sobs*. I had a job in the morning, and so I did not arrive at the expo until later that afternoon. Such is the makeup artists life! Therefore me and my main blog contributor, Delia Jimenez Owens (@deliajowens), just walked the floor to see what vendors had to offer and to plan our shopping escapades for the next day. Sunday, however, we arrived earlier with a mission and a purpose. AND I was able to attend one of the workshops I wanted to see plus catch a few minutes of a couple of the Keynote Speakers. 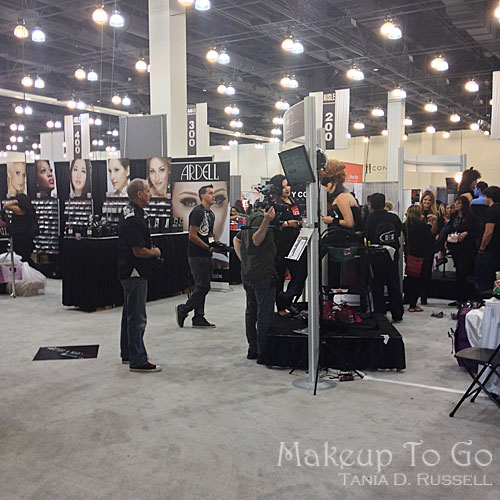 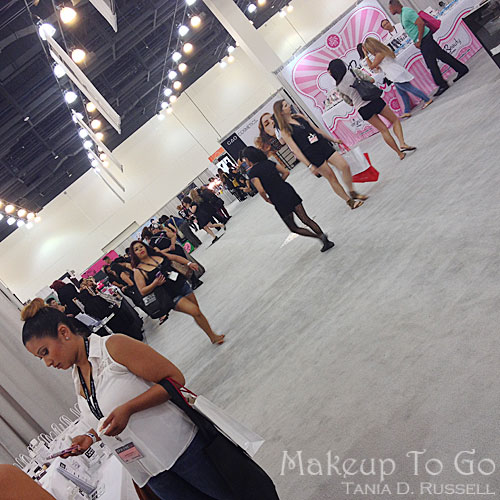 I didn’t end up picking it up just yet, but one of the intriguing new product discoveries was this Embryolisse Artists Secret Radiant Eye balm. It is a cooling under eye balm that immediately hydrates, brightens and tightens. When I first tried it, they did it on my arm but then my girl Robyn of Purely Cosmetics who also works with Embryoliise USA put some underneath my eye. Expect a review soon because that little sampling was highly impressive, I want one for myself and my kit!

This guy was a beast! When I arrived on Saturday, he was doing his Keynote speak/demo on the main stage but then for the entire rest of the show he demo’d almost continuously at his booth, “Rock Your Hair“. Apparently Mr. O’Rourke been in the business for over 50 years (??? – I still say he was a 1-year old when he started), so to see him still operating with that much energy, enthusiasm, and passion was inspiring to say the least! 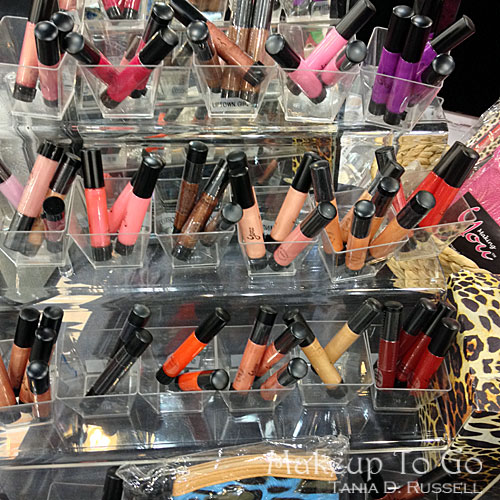 I’d not heard of this line before, so it is always exciting to discover a new, independent brand. The line has a number of offerings (I would say the line is mostly geared towards consumers), most impressive to me were the lip glosses. The lip glosses have nice depth of color, nice coverage, lay down smooth and aren’t too thick and gloopy (or thin and watery). And while this is a full spectrum line for all skin tones, there are a number of lovely shades for deeper skin tones. I purchased the 5 pack of full-sized glosses for my kit, although one shade might not make it there 😉 Also, super fun for consumers or burgeoning makeup creators is the “DIY Lipgloss Kit” which contains all the bases and a selection of pigments necessary to create your own lipgloss colors. You can visit them on their website: Making You Cosmetics.

There was another trade show happening this same weekend “across the Pond”, but that did not stop Frends Beauty Supply from being in two places at once. As always, the Frends booth was well stocked with all the necessary basics, including Clean Brush Shampoo. I didn’t get any since I just restocked, but my makeup homie Renee took 2 home. 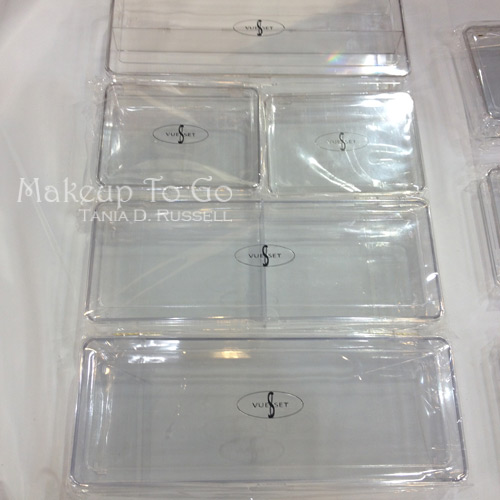 It was SO FABULOUS to see Brenda Green this year! I missed her last year when she debuted the Vueset palettes, so I did not want to miss her this year when she introduced 5 new Vuesets. Look for a review of the new Vuesets coming very soon!

I was dying for an iced chai latte both when I arrived Saturday afternoon and after walking the floor on Sunday afternoon. Both days I was denied because the Starbucks that is IN the Pasadena Convention Center building – the building where the trade show was taking place – CLOSED in the early afternoon both days. On a WEEKEND. Who does that?!?!

This was the ONE workshop I absolutely did NOT want to miss. I know a lot about being a media makeup artist, I have been at it for a while now. However, as I continue to build the Makeup to Go! empire, I realize there is a lot a lot I do not know about the world of Social Media. Learning WordPress was hard enough, but things change in the Social Media landscape everyday. From the casual user to the paid Social Media professional, there is a lot to keep up with. All of the panelists (with the exception of Star Walker who was the moderator and Danny Rodriguez representing Beauty Blender who was on the panel to discuss Social Media from the Brand side) have been successful in turning their Social Media presence into legit cottage industries. Marlena of MakeupGeek has turned her passion into a full on business and in addition to having a successful makeup line, she will be opening physical stores soon. Wow! That is not my ambition with Makeup to Go!, but I do have goals so it is inspiring to hear where people have been able to go using Social Media. I really appreciated the willingness of the panel to share real knowledge. I learned a lot!

Speaking of turning an online presence into an entire enterprise, the ladies of Pixiwoo have to be one of the premiere examples. They got their start as makeup artists FIRST, working at cosmetics counters and also under their aunt was was a prominent UK Makeup Artist. Before Social Media and YouTube was even a thing, Sam – after having her first child – started making video tutorials of makeup demonstrations on herself and the rest as they say… After a brief speech about their history and start in the social media world, the sisters did a demonstration of a “London” makeup style (which is – by their description – a little bit funkier and quirkier than the clean sophistication of a “New York” style).

Towards the end of the day I finally ran into some of my students who attended their first trade show as professional makeup artists. 🙂 Regretfully, I did not take a photo of Sabrina and Veronica who were also in attendance (It initially slipped my mind to take a photo altogether, I just fortunately happened to run into Amanda and Annette again), and I missed my girl Wendy entirely. 🙁 But I’m super proud of my students for making it to the show! 🙂 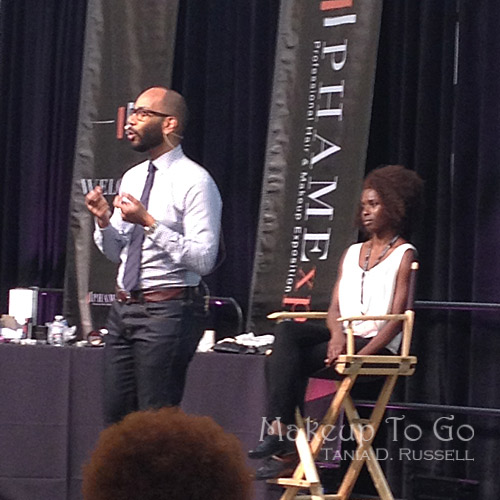 I really had not planned on seeing Sam Fine’s demo just because I have seen him in demonstration so many times, yet I found myself standing and watching yet another Sam Fine demo. For me, that is the power of a great artist – I just cannot help but be drawn in by their awesome powers. In addition to being a great artist in terms of the caliber of his work, Mr. Fine is also a great demonstrator in terms of how he works with the crowd. Some of the questions asked were quite basic from young artists who have not yet gone pro (how to match foundation, etc.) and he neither hemmed and hawed NOR just gave the audience easy answers. He challenged question seekers to THINK about what they were asking, how there probably was not one answer that fit all situations, and how they can find solutions to their own makeup issues. To me that marks a Master Teacher as well as a master artist.

and my 2014 haul which includes MakeupGeek, Making You Cosmetics, VueSet (thanks Brenda!), Parian Spirit (I was reaching Kenny Loggins “Danger Zone” levels in my supply!), and lots o’ lashes (Ardell and Red Cherry).

LAST SHOW NOTES
– I was super happy to see increased attendance this year, and I hope it grows more next year. Remember, this event is open to the Public. It is not a professionals only show so tell your friends and relatives to come SHOP! 🙂
– Check-In was easy-peasy and the show staff were friendly and helpful.
– It was nice to see the nail vendors getting some love. I discovered a great new product I plan to try and talk about soon (perfect for us non-manicurists!)
– Anastasia and LimeCrime were busy the ENTIRE time I was at the show, I couldn’t even pretend to get to either booth until it was almost show closing time.
– This show is all beauty all the time (no FX!) so I hope more of the BEAUTY brands come to exhibit next year. Smashbox, Stila, Muse Beauty Pro, Bdellium Tools, Becca, etc. etc. I am looking at YOU! 🙂
– ONE CRITIQUE: There is a bit too much noise around the main stage. It was often hard to hear presenters (visit my Instagram feed – @makeuptogoblog – to see and hear a video portion of Sam Fine’s demo).

If PHAME comes back for a third year, I will do my best to be there. So here’s to a third year!

Many thanks to the PHAMExpo for giving myself and my Blogstress in Español, Delia, passes to attend the show!

How was your PHAME experience? Let me know in Comments below 🙂